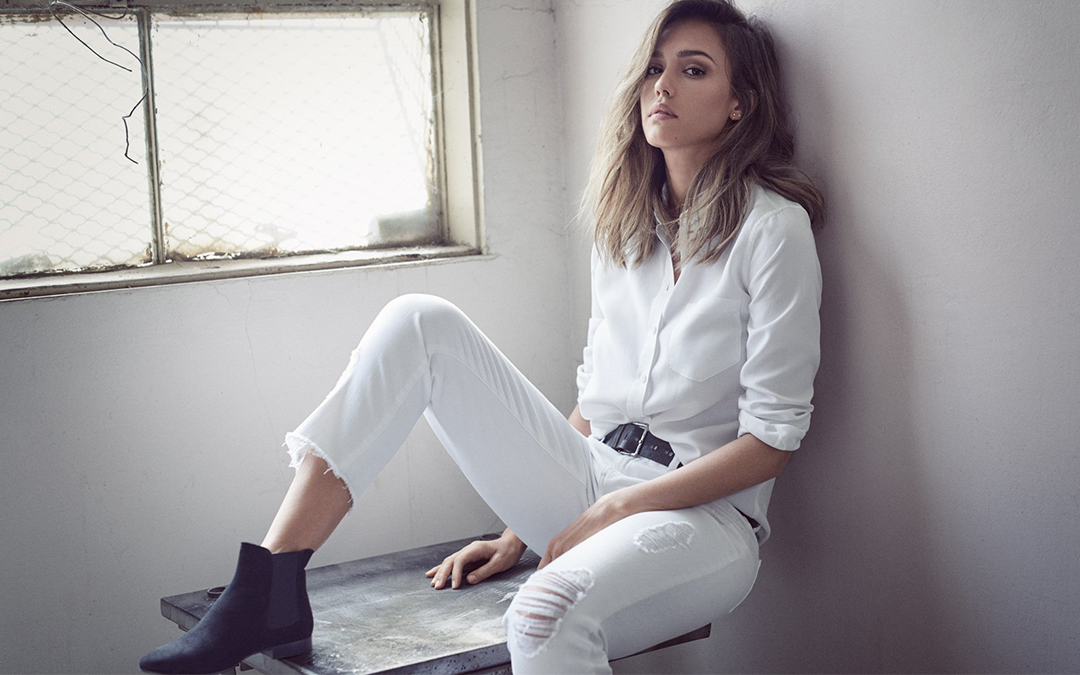 When it comes to denim, there’s not a lot Jessica Alba hasn’t experimented with: stonewashed short shorts, jeans with the waistband cut off Mariah Carey style, classic 501s, Blossom-inspired overalls, colored jeans, boyfriend jeans, skinny jeans, distressed jeans. “Oh, girl! I have all of it,” she says. “I probably have two full racks of denim and each hanger is doubled up. It’s excessive. It’s next-level.” No wonder, then, that the actress and entrepreneur’s first foray into the world of fashion happens to be in the form of a collaboration with denim brand DL1961. “I wear so much of it,” Alba says. “And there’s nothing like finding the perfect pair of jeans.”

Alba, who is also the face of the new grunge-inspired Spring 2016 collection, will design eight to 10 pieces for the Fall 2016 collection that hits shelves in August. “I live in Southern California and people aren’t too fussy out here, so wearing jeans out to dinner or an event isn’t out of the question,” she says. “You can throw on a great blazer, a blouse, and a pump and that’s just as acceptable as a cocktail dress.” As a result, she’s become a dab hand at everything from the Canadian tuxedo (she teams hers with a pair of killer heels and wears it to meetings) to high-low (think a denim jacket over a Giambattista Valli cocktail dress come evening).

When it came to designing her own collection, Alba used her own rather enviable body as a starting point. “I remember having to lay down to button up those tiny Daisy Duke shorts because I had a big booty. I had to squeeze into my friends’ jeans because my mom wouldn’t buy them for me,” she says. “My inspiration for most things in life is always the ’90s supermodels: Cindy, Naomi, Claudia. Those bodies! Lately I’ve been getting back into bell-bottoms, but high-waisted and not too flared. The jeans that I’m designing are going to celebrate women’s bodies and show off those curves.”

The label’s ethics were also a good fit for Alba, whose Honest Company produces nontoxic, environmentally friendly products. “DL1961 is a thoughtful company in the way they go about creating denim, and that angle was important to me as well,” she explains. The denim brand relies on an unique “confection” of fibers that cuts the processing time in half and uses half the dye, half the water, and half the energy that it takes to produce traditional denim. The label has also developed an on-site filtration system that purifies the wastewater until it’s potable, a combination of eco-friendly practice and technology that, Alba adds, creates reliably cool denim. “The fabric stretches to your body and shape but doesn’t get baggier throughout the day.”

This season she’s gravitating to a high-waisted Farrow jean in black, which she tends to wear “with a thin white tee, an oversize blazer, and a loafer or oxford.” The one piece she is most keen to perfect next? Says the budding designer: “There’s nothing like a great denim jacket.”

Summers not over just yet at Palladio… MC2 has

As we start feeling the cold, @thunderslove are ju

End of SS23 team celebration drinks, suns out for

The beautiful girls of @sancia_thelabel showing us

@thunderslove socks are designed in a little villa

Certified by “BCOME”, around 50% of the weight